Alessio Mida, filmmaker, photographer and avid traveller, has covered more than 2,500 km by footbike in Europe.

What led you to buy a scooter, or start riding one?

It was quite a poetic moment, because the same day I decided to buy a scooter, a series of incredible things happened. I met an Italian girl in Frankfurt. We spent the whole day together falling in love, chatting, walking, eating together; then I accompanied her to her hostel and waited with her for her bus to take her back to Italy. I walked home with my head spinning. I’d just had a crazy day and I wanted to see her again. 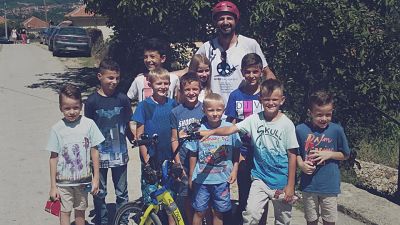 But I stopped at a set of traffic lights on my way and, even though it was winter, I saw something really beautiful: a happy child riding a scooter. I decided to start scootering right then. I realised that I was going to break all conventions using it.

Did you decide to try out a scooter or did you buy one straight away after that experience?

I immediately bought an Oxelo scooter I found in Decathlon; I wanted to be able to travel and also to carry it on public transport.

Did you start travelling by scooter straightaway?

First of all, I travelled from Frankfurt to Luxembourg for training. It was 250 km, which I did partly scootering, partly hitchhiking. Training started in March 2014, and my first actual trip took place in August of the same year. I went to Bratislava with a scooter in my luggage and from there I left for Tallinn, then Helsinki, the Åland Islands and Stockholm. I didn’t do the entire trip by scooter; I took a few trains, coaches and boats and did a bit of hitchhiking

How did you end up buying a large-wheeled scooter?

I made a short documentary during my trip, which I presented to Decathlon upon my return, asking for sponsorship. I immediately realised that, if I wanted to use other types of scooters, Decathlon would not have been able to meet my needs.

Therefore, I had a look online and found footbikes. I contacted someone at MyFootBike Italia and asked them for sponsorship. They accepted and this is how I received my Kostka footbike. 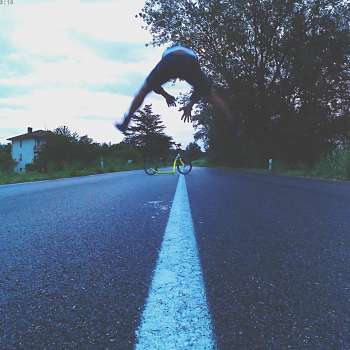 How do these two models, the Oxelo and Kostka, compare?

Obviously, they are worlds apart. They are incomparable at a sporting level – by this I don’t mean to say that the footbike is better.

There are some surfaces, take smooth asphalt for example, where the Oxelo scooter can reach very high speeds, however the small wheels and plastic brakes are not great.

Oxelo is the best for ease of transport and gives you a great sense of freedom. For example, you can take a small scooter with you to the shops. That’s difficult with a footbike because footbikes are considered bikes.

The size of the Kostka, the type of wheels, the fact that it has brakes, makes it seem a bit more serious when compared to the Oxelo, which might seem little more than a toy at times. These are the deciding differences.

TELL ME ABOUT YOUR LATEST TRIP.

I’ve already written and said many things about my trip. I imagine you’d like to know something about the use and manoeuvrability of the scooter. I made my first trip, from Slovakia to Sweden, by scooter, carrying a backpack that weighed around 20 kg.

Consequently, my South Balkans trip was also initially planned with that vehicle, as my scooter did not allow me to carry that kind of luggage—loading it with more weight risked making it unstable.

When I found the footbike and saw how it was built, I realised that I could have loaded it up if I wanted to, but I’d already decided to leave without baggage at that point, just the minimum essentials: a little bit of equipment, my passport… not even money or clothes. I’d already decided to do my trip this way.

Youŕe writing a book about your experience, when will it come out?

The book is finished and will go into print soon. It will be launched on 8th November. Then there will be another at the beginning of December, at the Small-Medium Publishing trade fair in Rome.

Do you feel you’ve changed after your scooter travelling experience?

I’ve learnt how to appreciate slowness, to cultivate the concept of going slowly. When travelling by other means of transport – trains, planes, etc, one loses touch with the geography of the world.

Going by bike is a good way to be ‘present’ during your trip. This is even more tangible with a scooter, as you are constantly touching the ground with your feet—it’s a bit like walking on two wheels.

Thanks, Alessio, for sharing your experiences with us.